Although Armenians and Azerbaijanis experienced friendly relations for 70 years under Soviet rule, their relationship fell apart as conflict over Nagorno Karabakh escalated in the late 1980s (Zolyan, 2018). The war also negatively impacted the neighboring communities of Armenians and Azerbaijanis. Some locals who used to live in enclaves managed to exchange their houses with each other even before the war intensified (Shishmanyan). 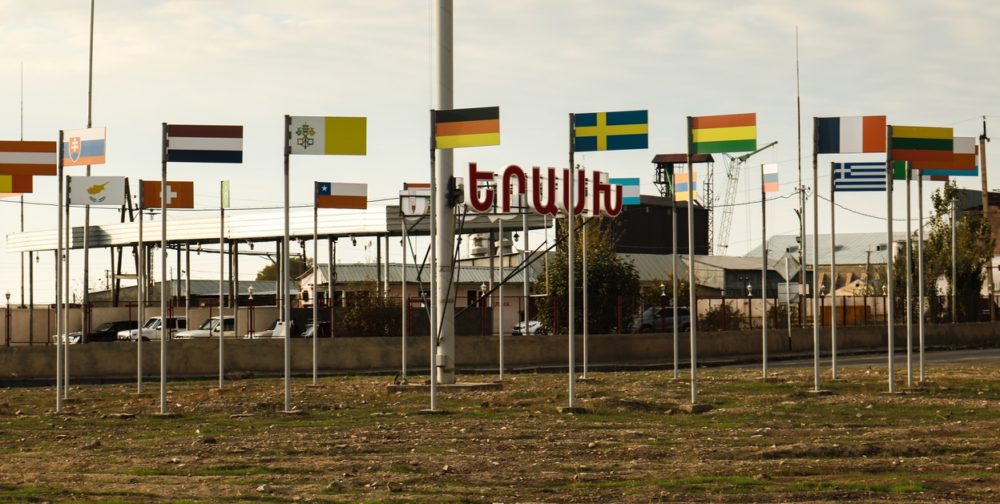 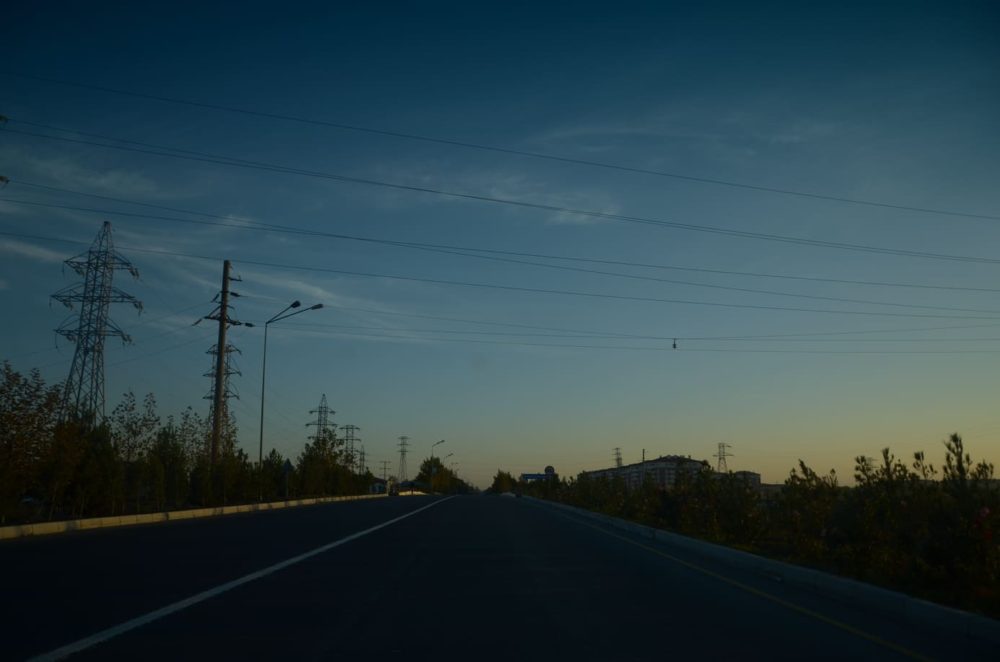 The road to Barda, Azerbaijan.

The railway infrastructure that used to connect Yerevan with Baku passed through Yeraskh[1] and Nakhchivan, which could potentially have positive impacts on the economic development of the village, if only it worked. Nowadays, the train from Yerevan to Yeraskh still functions, with the latter serving as the last stop.

Another railway used to pass through Gazakh[2] and Ijevan[3] to connect the capitals; Baku in Azerbaijan and Yerevan in Armenia. Passengers from both sides could cross to other side via this railway. Like other transport lines in the region, the railway played an important role in the economic development of the local communities. Unfortunately, this railway also stopped functioning as the war emerged between Armenia and Azerbaijan. Nowadays, the train on this railway only goes from Baku to Gazakh. Eventually, all of the relationships between the two old neighbors, including trade and business between Armenians and Azerbaijanis, disappeared, negatively impacting the daily income of these community members. 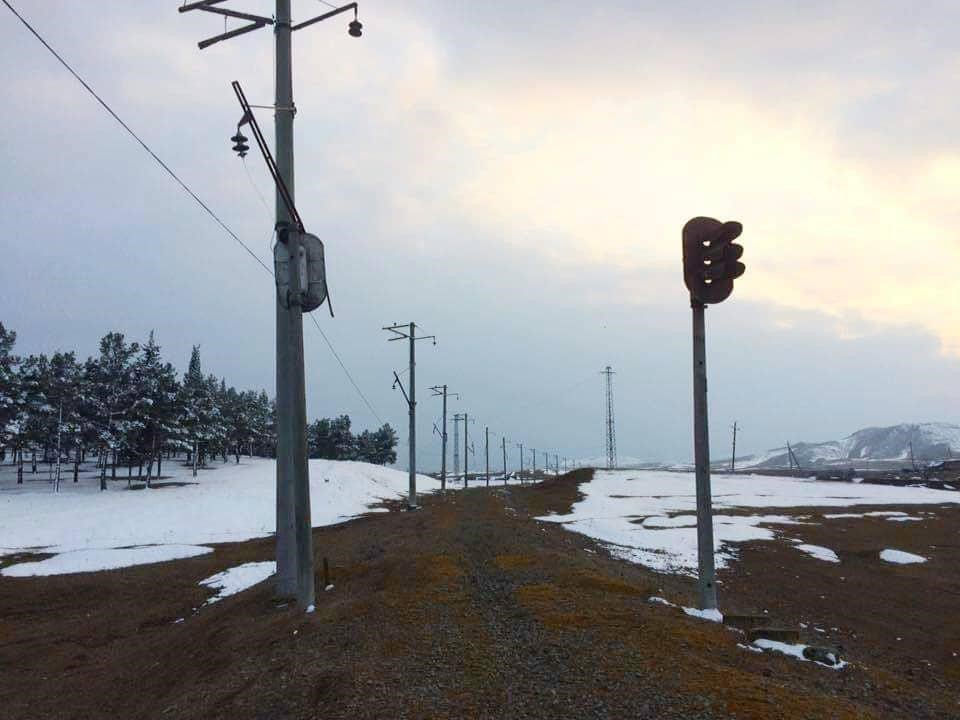 Apart from agriculture and cattle-breeding, there was a famous wine factory and production of vitamin flour during the Soviet period. During an interview with Hetq, the current village head Radik Oghikyan half-jokingly mentioned that “before, one could even find a snake’s egg in Yeraskh.” Although a small part of the factory restarted operations after Armenia got its independence, it was recently closed down. The economy in Yeraskh is heavily dependent on agriculture, and it has fallen behind neighbouring villages. 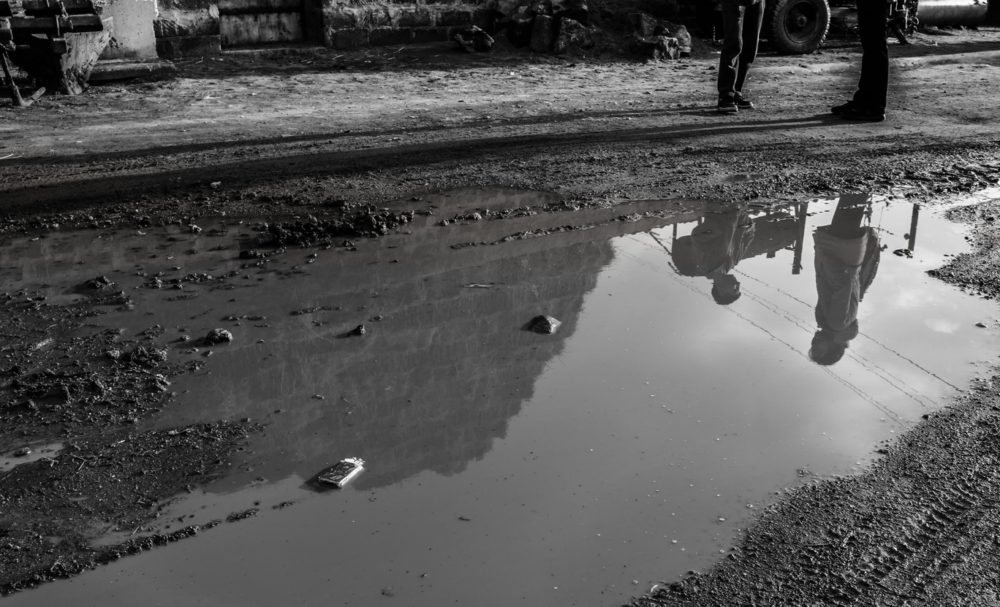 The roads in Yeraskh have not been asphalted in a long time, and rains turn into long-lasting ponds Photo by Lilit Gizhlaryan

Villagers still remember the time when Armenians, Azerbaijanis, Kurds and Yazidis lived there in peace. Siranuysh, one of the respondents, recalls her Azerbaijani neighbours, who seemed to be her roommates, rather than neighbours, as they lived in one house provided by the state, which had two entrances. “When the movement started, both the Turks[4] and the Kurds left. I bought this house from them before they left,” she said. 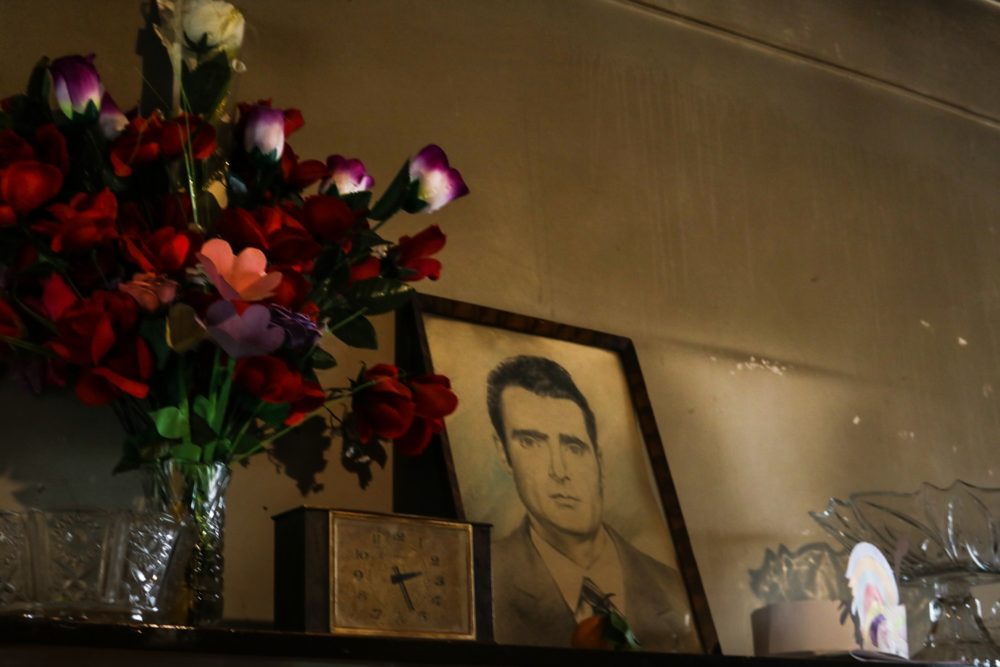 The picture of Siranuysh’s dead son in their living room. Photo by Lilit Gizhlaryan. 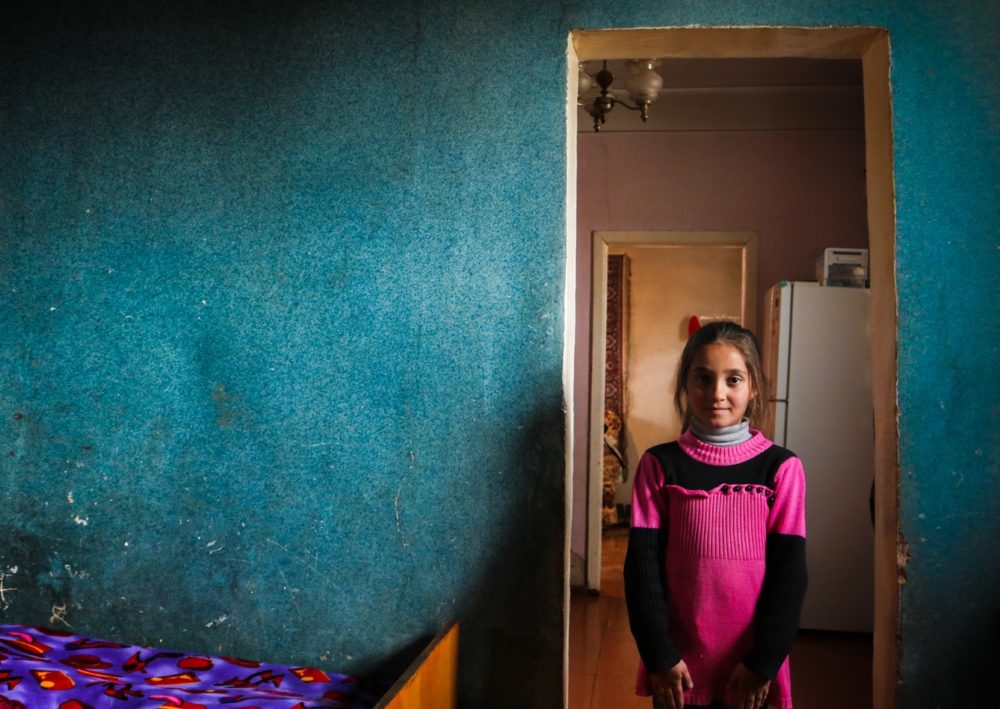 Siranuysh's granddaughter standing between the door that once used to be the wall dividing Siranuysh's house from their Azerbaijani neighbour. Photo by Lilit Gizhlaryan.

The war caused a lot of difficulties for the local communities living along the borders. Most of the houses and infrastructure were ruined as result of bombardment and shootings from large-calibre weapons. However, the residents of the village had to rebuild their houses and move back to them; as they did not have another place to live. Siranush adds, “We left the village for a couple of months. After we came back, we found our home without windows and half-destroyed. The house and the yard were full of bullets. As we had no other choice, with my two kids, we had to return and live in this house.” 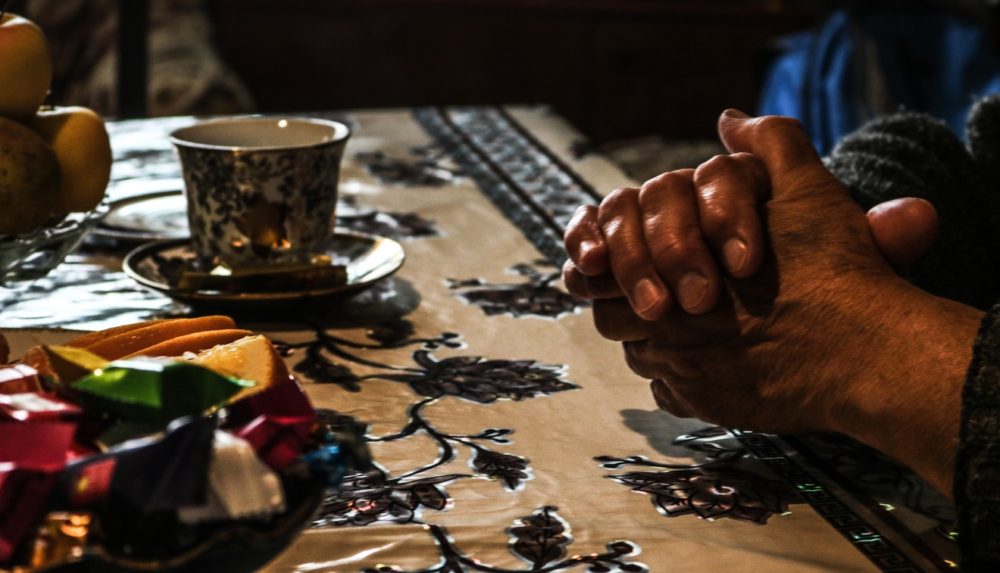 Siranuysh's daughter-in-law and two young grandchildren set the table for tea while Siranuysh tells her story. Photo by Lilit Gizhlaryan. 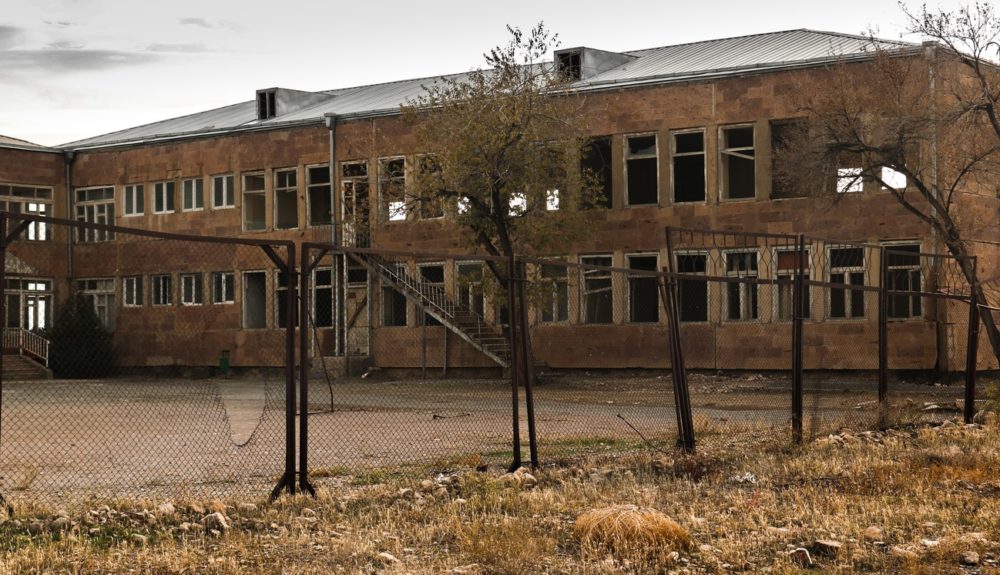 The school in Yeraskh village that was bombed during the conflict in 1990s. Photo by Lilit Gizhlaryan.

Interestingly, some traditions of these two nations, including marriage, music, cuisine, ceremonies, and other aspects of life became very similar to and intertwined with each other: For instance, preparing a dowry for Trndez[5] in Armenia and Chershenbe[6] in Azerbaijan. People from both sides who had experience living together share positive and kind memories about their old neighbours, friends, and acquaintances. Susan, another resident of Yeraskh Village, remembers her memories about her Azerbaijani neighbors, “When I moved here all of my neighbours were Azerbaijanis. We became very good neighbours. We would go to each other’s places all the time, we would do everything together. We would can food for winter, I would bake lavash and she would make ‘bokon’ in the tandoor.” 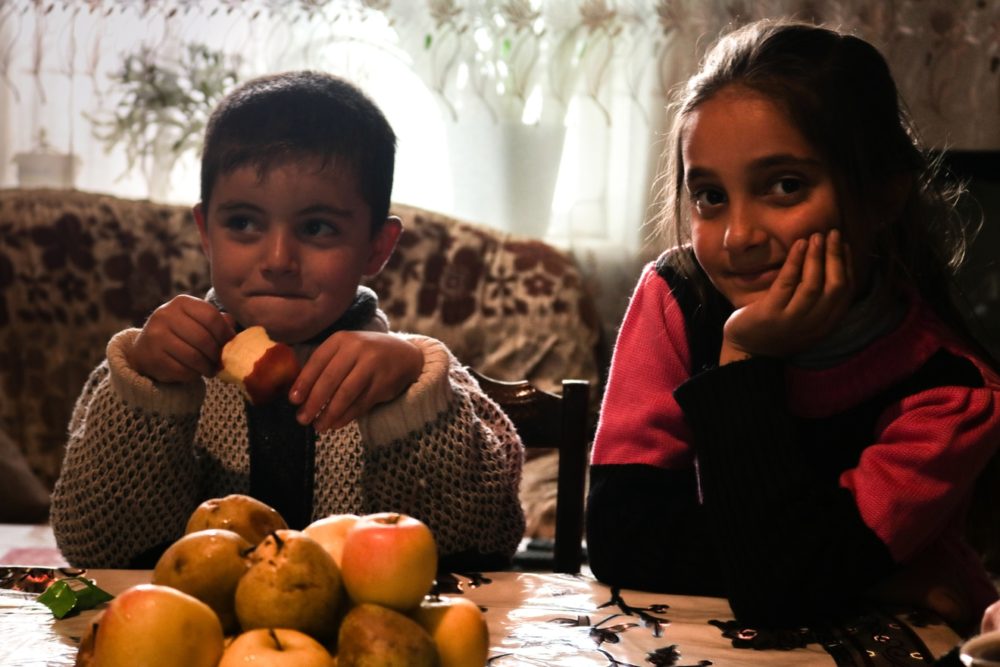 While different protests or local clashes happened between Armenians and Azerbaijanis in Nagorno-Karabakh, locals in the border communities could still keep communication with each other. Susan highlights, “After Sumgayit [events] we still had good relations. We could all still cross the border. Some of them would even come here to visit us, and return back again. There was no conflict with the locals.”

However, all relationships and communication between bordering communities gradually stopped as the war over Nagorno-Karabakh started in the early 1990s. Susan remembered a story that happened to her and her friend when the movement had first begun: “We had crossed the border to harvest herbs when a man approached us. We were scared at first, but then he asked us if we could help him. He used to harvest herbs and sell them in Yerevan to take care of his family. As he was not able to do it anymore, he asked me to sell the herbs for him.”

The relationships among various nations, including Armenians and Azerbaijanis, used to be very peaceful. They had friendly interactions with each other during the Soviet period. The residents of Yeraskh village experienced the war with all of its consequences. Neighbouring Heydarabad on the other side of the border is a few hundred meters away from Yeraskh. Indeed, this fact always framed their collective lives. 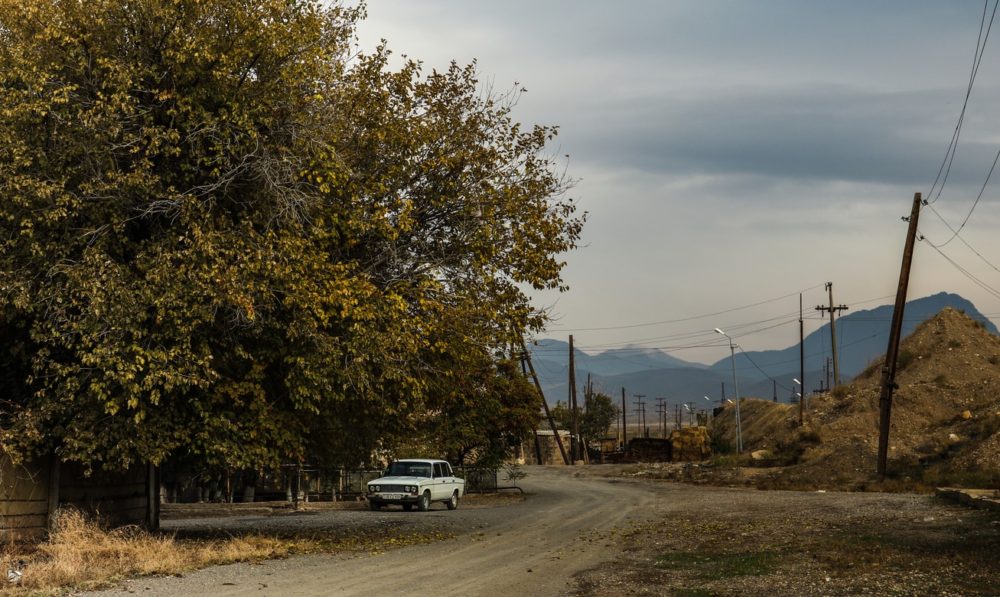 The main path that takes to Yeraskh village. Photo by Lilit Gizhlaryan.

People in Gazakh used to own grassland in Armenia which they visited, and they spent their summer holidays there. However, the relationship between countries deteriorated immediately after the collapse of the Soviet Union, resulting in loss of life on both sides, and neighbours began to see each other as the enemy. Arzuman from Gazakh remembers, “As there was friendship among the people during the Soviet rule, it was hard to imagine the possibility of war one day. However, those positive feelings and thoughts evaporated with the dissolution of the Soviet era.”

Hosting the Horrors of the War

As a result of the war, displaced people spread out to different regions in Azerbaijan. Barda is one of those regions that host the largest numbers of displaced people from Karabakh. Shots from large-caliber weapons are easily heard in Barda, as the city is quite close to the line of contact in the cities of Tar-tar and Aghdam. However, people in Barda at least don’t have economic  problems, as the city has historically been one of the high-performing regions in Azerbaijan. Ulviyya confidently talks about how their village is close to the line of contact areas. “There are three kilometers between us and Armenians. There are our soldiers ahead of us, our villages lies down before them…” The flow of displaced people from other regions of Karabakh to Barda also impacted every spectrum of life: socio-economic conditions; demography; migration; and urbanization.

According to locals, some Armenians used to live together with Azerbaijanis in this city before the conflict started. As in other border communities and districts in Karabakh, people from both sides had very good relationships and positive interactions with each other, which changed after the onset of the conflict.

Although recently ceasefire violations rarely happen in the border communities, human security is still a vital concern for people living there. The high intensity of the shootings negatively impacts people’s daily life. People describe the Four-Day War in April 2016 as another trauma for the front-line and border communities. Sardar, a displaced person from Aghdam who lives in Barda shared his thoughts: “The April war was another page… It was like I was travelling 25 years back to being three years old. People were stuck in their homes with flying rockets above their heads, grenades being thrown outside. The interesting thing is that if it were back then, we would be afraid, however, here we were silent and numb…” 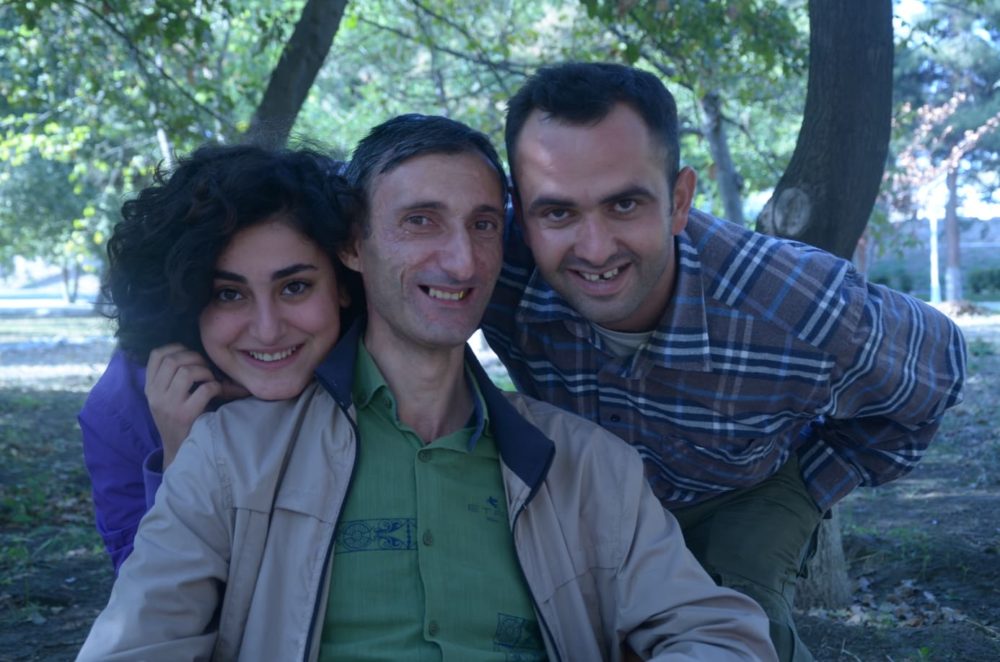 Sardar with his friends.

Dreaming about a Prosperous Future

Unlike the elder generation, almost no one from the younger generation has had any interaction with the other side. Because parents and grandparents share their positive and negative experiences and memories with their children, they know that the Armenians and Azerbaijanis possessed friendlier relations. At the same time, the war left a trace, a negative impact in the memories of children who grew up in intense times of war with constant gunshots and images of martyrs living on the front line. Sardar shares his memories as he learned about the war and the military for the first time in his life: “The war caused us so many hurdles in life. We went to a school that was half destroyed. I had already started to see trucks full of martyrs when I was three or four years old.  We were not mature enough to know what war meant, however, we were old enough to remember how it felt living in vans and gardens…”

Rebuilding relations with Armenians divides our speakers into two groups as they think about whether it is possible for there to be peace between the two peoples. It seems possible for some people, but impossible for others, especially those who approach the idea with the memory of tragedy. Sardar shares his thoughts: “I am sure that Armenians think the same. There is a generation growing up. I don’t think it’s impossible to live together with Armenians. Yes, there have been so many things that hurt, the April war is one of them. So many martyrs, victims…”

The war over Nagorno-Karabakh has left very negative traces, memories, and experiences socially, economically, and physiologically in the lives of people living in the communities along the border between Armenia and Azerbaijan. People believe that it will be possible to rebuild their friendship and coexist if both countries achieve a peace agreement on the official level. In other words, people who were interviewed think that it might be possible someday, as there is no enemy for eternity.

Zolyan, Mikayel (2018); How It All Began: The Soviet Nationalities Policy and the Roots of the Karabakh Problem. EVN Report, Source: https://www.evnreport.com/spotlight-karabakh/how-it-all-began-the-soviet-nationalities-policy-and-the-roots-of-the-karabakh-problem

[1] Located in Ararat province of Armenia, across the border from the Nakhchivan region of Azerbaijan.
[2] Region of Azerbaijan neighboring the Ijevan region in Armenia
[3] In Azerbaijani Icevan (eds.)
[4] Terminology typically used by older Armenians to refer to Azerbaijanis
[5] Called also Tyarndarach and Candlemas Day.
[6] Novruz holiday celebration.