In the Soviet era, when the borders between neighbors Azerbaijan and Armenia were open, two regions, Tovuz — 440 km from Baku, and Tavush — 165 km from Yerevan, were connected with the Akstafa–Dilijan railway line. The railway had been in operatiion since 1971, carrying both cargo and passengers.

The 1988-1994 conflict in Nagorno Karabakh resulted in the closing of all borders with Armenia; land borders and asphalt roads were impassable, and railways were shut down. This closed off the movement of people, and opened the way for artillery shells.

People living in Tovuz still recall the pre-war times when the borders were open, and relations with neighboring Armenians were primarily grounded in trade.

“We would go to trade in Armenia and they would come to trade here. They would buy fruits from us and would even take the mulberries from the trees they shook in our yards,” recalled Rovshan Tanriverdiyev, 49,  a resident of Tovuz’s Bozalganli village.

Before the Karabakh conflict, Rovshan and his brother — older by ten years — would travel to the other side. There was no border control or inspections.  Crossing was as simple as taking a train from the Tovuz station.

“The last time we went there was in 1987,” he said. “We took sweet cherries to sell in the Armenian towns of Dilijan and Ijevan [both located in the Tavush region of Armenia]. I remember they had small markets there and you could find whatever you wanted. Fruits, vegetables, meat…”.

Rovshan recalls that when relations were normal, they traded and exchanged goods with Armenians.

“They would help us. They would offer a place to stay and a counter in the market. It was not difficult to travel either. You would get on the train here and get off there. I remember, their houses were at the top of the mountains. ”

“We saw no harm from each other. But we ended up with the situation that led to war and hostility,” says Tanriverdiyev.

According to Rovshan, as the conflict in Karabakh escalated the situation in Tovuz worsened. “They were shooting, and shells hit houses and lands. Our crops and animals were destroyed. Worst of all, people were dying.” 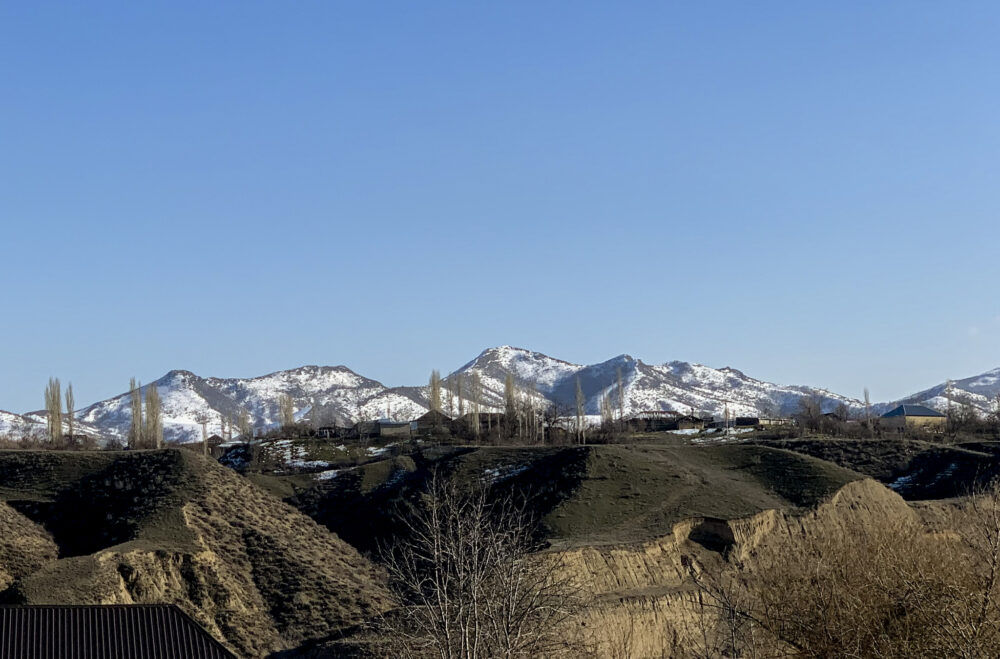 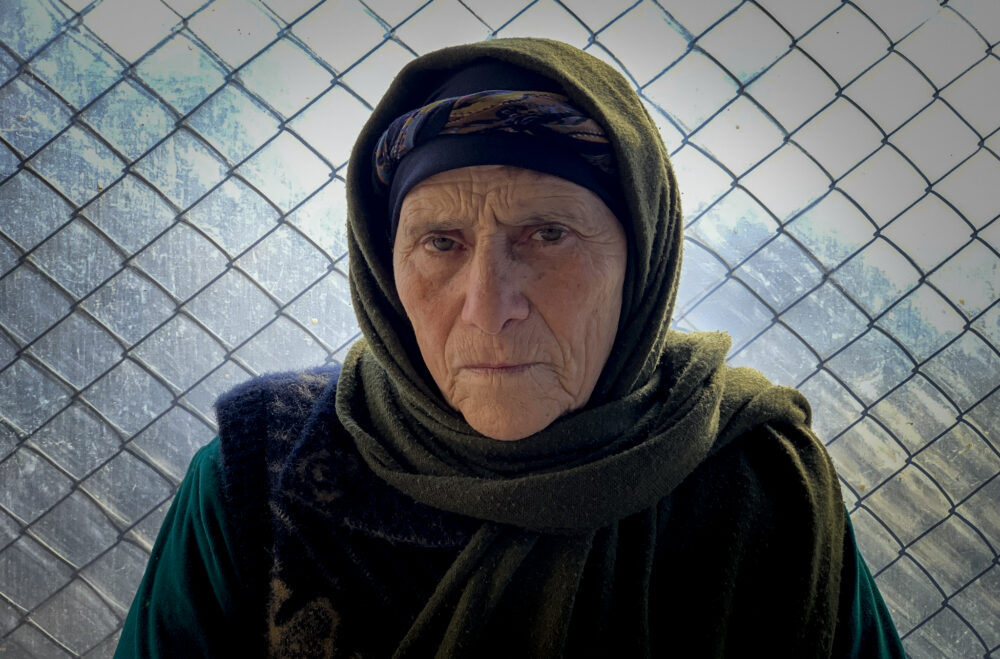 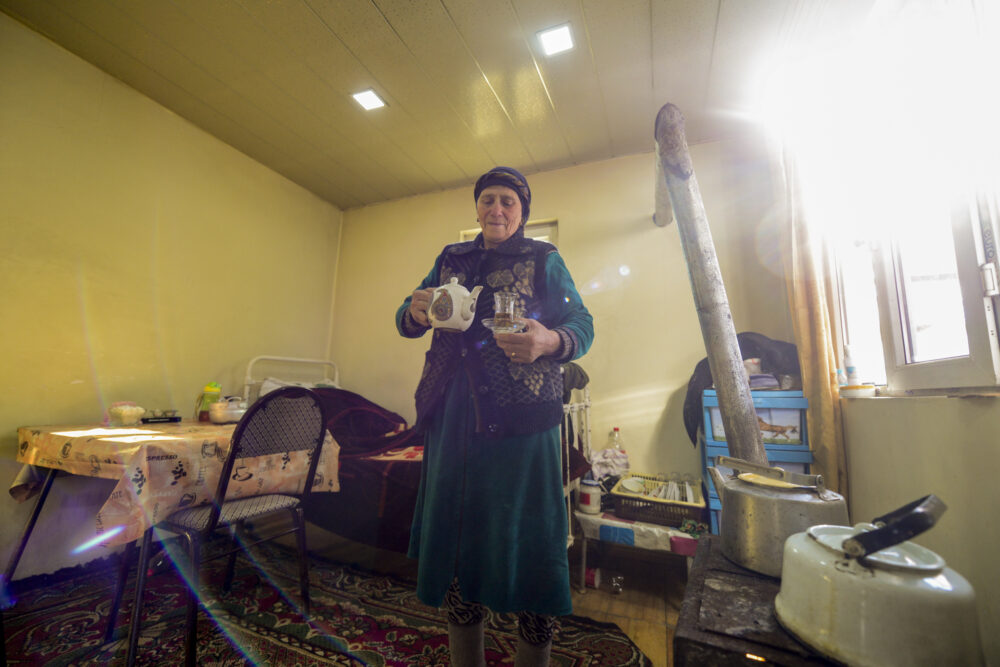 Another Tovuz resident, Isa Aliyev, 74, is from the Tovuz village of Agdam, which borders Armenia.

“We lived like brothers with Armenians until the  Soviet Union collapsed. We did not see any differences,” he said. “We did not make a difference that they were Armenians. But they made it. How did we know? When we crossed their territory, they would say, ‘The Turk has arrived.’ I would answer that we are not Turks, we are Azerbaijanis. ‘It doesn’t matter, you are all Turks,’ they would reply.”

Isa said that the last 30 years passed under constant shooting and shelling. His wife was injured once, in her neck and arm. Nevertheless, they never left their villages:

“We did not leave the village, neither in the 90s nor in the Tovuz summer events [four days of clashes in July, 2020, between the Armenian and Azerbaijani forces]. I even think that the latest war [in 2020] started in Tovuz. There was a four-day shooting here in the summer and still no one moved. You know the rest. Thankful to this day. Praise the brave sons of Azerbaijan.”

Isa says he has never been hostile to Armenians. He did not want war:

“We lived like human beings. Then they started to claim Karabakh. They had a map. I say what I heard from Armenians. There was a history and geography teacher named Akop. We were kind of friends. He told me, Isa-jan, you don’t know, all territories from Yevlakh are ours, we have the map. They wanted to get all these lands, but thankfully it did not happen.”

Isa also recalls the railway line that passed through the Armenian towns of Ijevan and Dilijan. He says at that time Armenians had a warehouse in Tovuz:

“They would store their construction materials there, flour, grain, coal, etc.  Once all they needed was collected, they loaded it and took it to the nearby villages via Aghdam [the Tovuz village located on the frontline]. The distance between us and their Chinar village was 3 kilometers. There was even a direct bus from our village to Yerevan.”

According to Isa, the problems started just before the collapse of the Soviet Union. 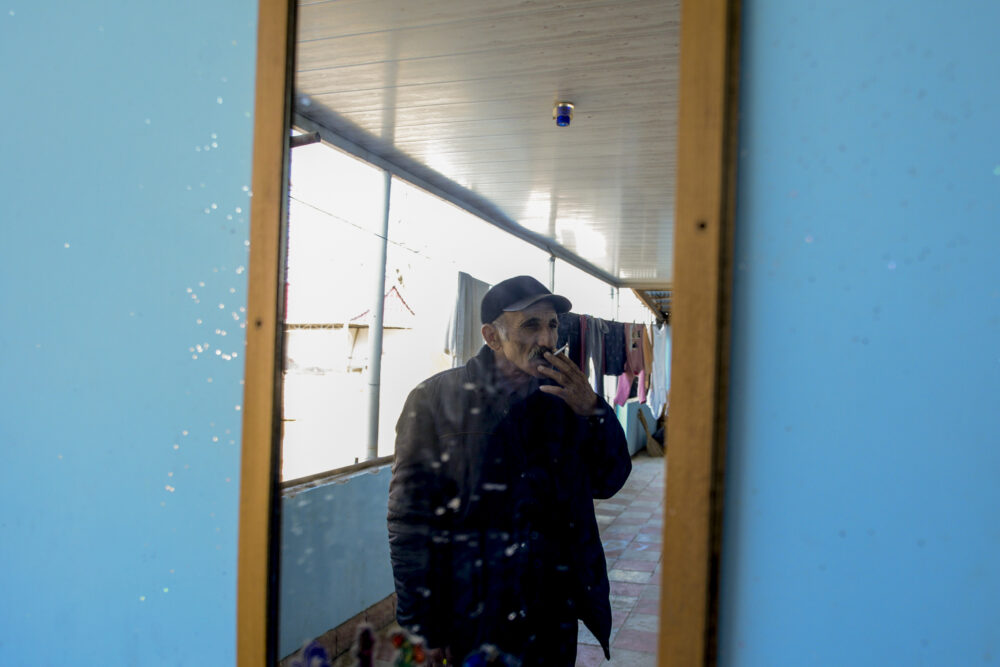 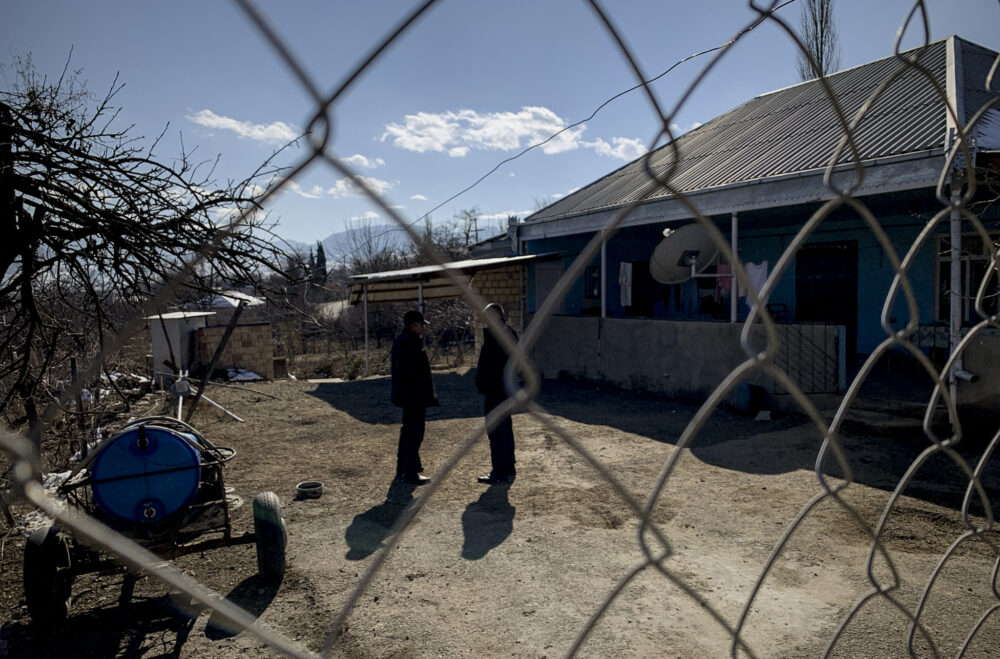 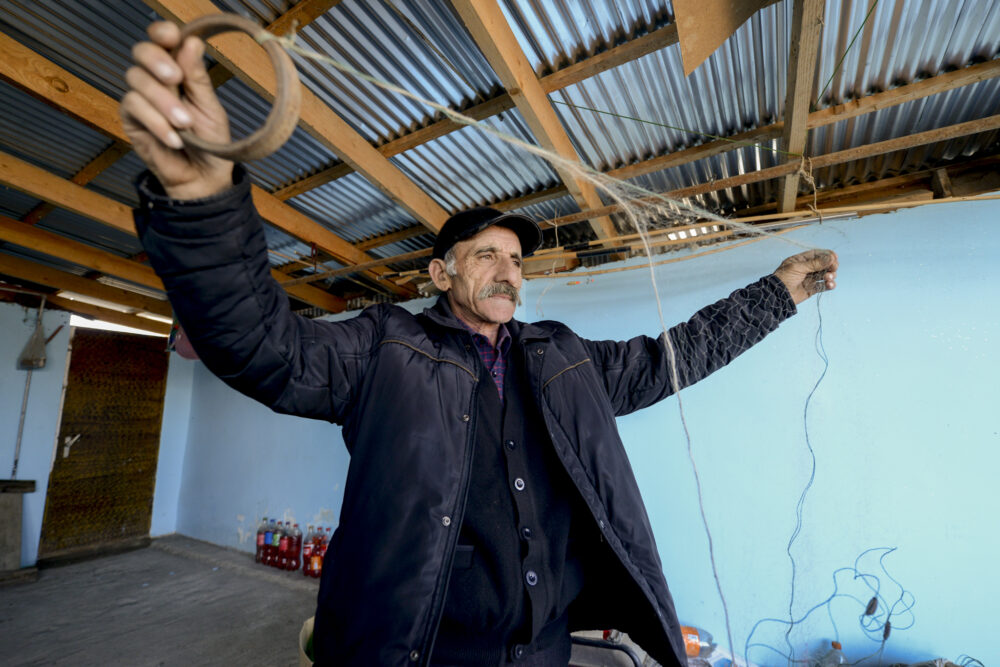 Alagoz Suleymanova, 71, also lives in the village of Agdam. For 50 years she has been running a canteen for villagers and visitors. But since the war started, she has mainly served soldiers.

In the early 1990s when the conflict had just begun, she lost her son, Shahvalad, during the shootings. Shahvalad was 17 years old at the time.

Alagoz says during that time they would protect the village with spades and pitchforks. Her son, Shahvalad, would often go to help the soldiers:

“At that time, everyone who had functioning arms and legs would go to help the soldiers. When my son was there the fire broke out. He was hit by a bullet from the other side  – died right at the bottom of that mountain.”

She says she witnessed many things over the past 30 years, and the worst of them was the clashes during the July events: “Our general, our soldiers, the villagers were killed. We did not leave anywhere, but we sat and hid in bushes, gourges, behind the rocks. When it calmed down, we returned home. Since 1993 we have experienced many things and have seen deaths. Our houses were destroyed, the ones who would never leave the house could be killed inside their houses [by shells]. We have been suffering.”

Alagoz says that it has been quiet since November of 2020, after the leaders of Azerbaijan, Armenia, and Russia signed the November 10 ceasefire agreement.

“We can finally relax at home. Praise to our soldiers, our president. Our lands were taken back, our refugees became happy. Finally, they will be able to return home.”

Alagoz does not fully understand the reason behind the conflict between Armenia and Azerbaijan.

She simply states that something happened and it is not the fault of common people:

“It is a historical event, it is said that it started a long time ago. I am uneducated, I don’t really know. Look, this road led straight to Dilijan, Yerevan, Sevan. They would come and go. It was a busy road. They had things to do with the kolkhoz and sovhoz (collective farm and the state farm). They would give medicine to our farm animals. The heads and workers from both sides would become friends/comrades. I don’t know what happened, how it happened but things got messed up between us.”

Alagoz recalled how the 44-Day War — that broke out on the line of contact between Armenia and Azerbaijan on September 27, 2020 — was announced in President Ilham Aliyev’s televised speech:

“We watched the TV. The president said that one region was liberated, the next day he would announce another region. In the end, he said that the war was over. After that, we relaxed. Thank god, it’s quiet now.”

Rovshan Tanriverdiyev’s grandmother also lived in the border village of Agdam in Tovuz.

He recalls his childhood spent there, “At that time, there were buses from Aghdam to Chinar village in Armenia. We would put 10-15 sweet cherries on tree branches and would stand along the road. The passengers of the Armenian bus would buy these cherries from us. We sold a branch for 20 qepiks (cents). At the same time, we would also fill the buckets with apples and pears, arranged  on the side of the road. They would buy them too.”

There was a large mulberry tree in Rovshan’s yard.

“Armenians would come to shake that tree and collect the berries. We would cook food and they would stay with us to eat and have tea. Then they would leave saying goodbye. We didn’t want to experience this problem, but it happened.” 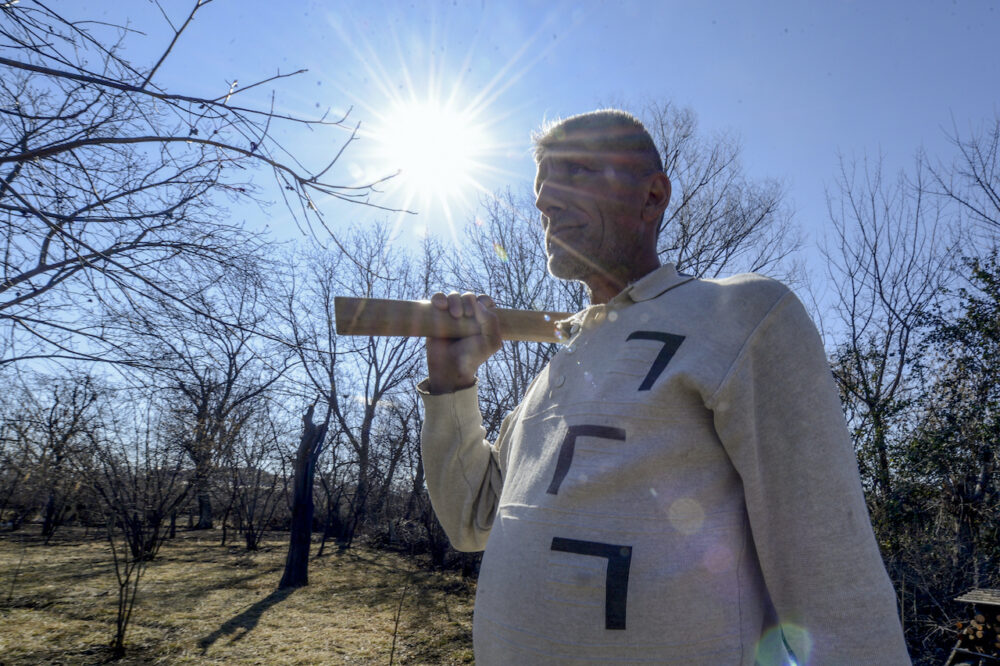 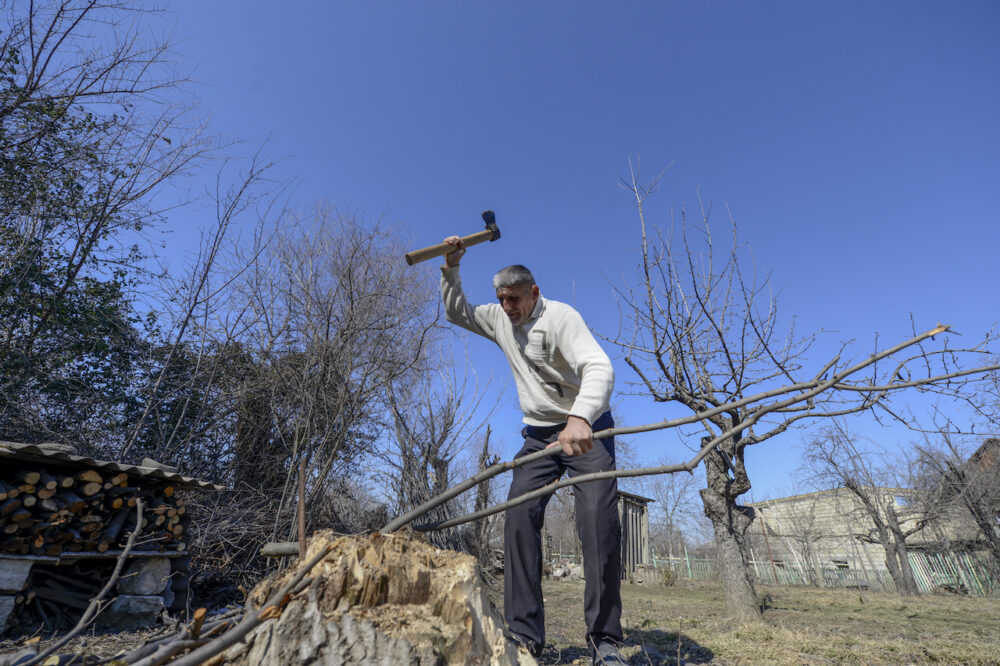