In January, 2021, following the war between Armenia and Azerbaijan over Nagorno Karabakh, which sparked in September, 2020, some Armenians and Azerbaijanis created “Kavkazskiy Perekrestok,” [Caucasus Crossroad] . Their creation was a facebook group intended to start a dialogue and also counter the hostility and hatred expressed towards each other on social media.

“Before meeting the Armenians in this group, surnames ending with “yan” aroused fear in me. My only association with Armenians was Khojaly. I see terrible pictures every year in Azerbaijan, be it at school, in the Academy where I was studying, on the street, everywhere,” says Fidan Akhundova, 26, a Berlin-based designer from Azerbaijan.

A turning point for Fidan, in her perception of people living in the neighboring country of Armenia, was when her friend Lala Hasanova added her to the group Kavkazskiy Perekrestok. Hasanova is one of the moderators of Caucasus Crossroad.

“Let’s not forget, we are neither politicians nor historians. We are people who want peace. And we will talk as usual people,” states the Kavkazskiy Perekrestok page, which, while created only in January, now includes more than 1,500 members. The group aims to discuss the conflict but also share casual daily conversations and photographs with “the neighbors”.

“Kavkazskiy Perekrestok” became a safe and cozy place for both sides. Lala thinks that the lack of dialogue between the two nations over 30 years has had negative consequences in the form of dehumanizing the enemy. “Most of our participants are ordinary people who are not strongly involved in political processes of peacebuilding. For them, this is really something new”, says Lala.

While the hatred and blatant expressions of hostility between both nations were continuing on social media, some groups of Azerbaijanis and Armenians crossed in “Kavkazskiy Perekrestok” and tried a peaceful dialogue.

“Thanks to this group, this veil left my eyes,” says Fidan. “I began to see people, individuals who have nothing to do with this tragedy. I also learned about the pogroms in Sumgayit, in Baku. I learned the pain that the Armenians carry with them when they move from Baku. I never thought about it.”

“Kavkazskiy Perekrestok” helps Fidan contribute to the dialogue and express her relation to the conflict via self-created illustrations. For example, one of her illustrations spurred an eternal “dolma” dispute in the group colored with a sense of humour.

“We have so many similarities, we should discuss this, not whom dolma or lavash belong to”, says Fidan. 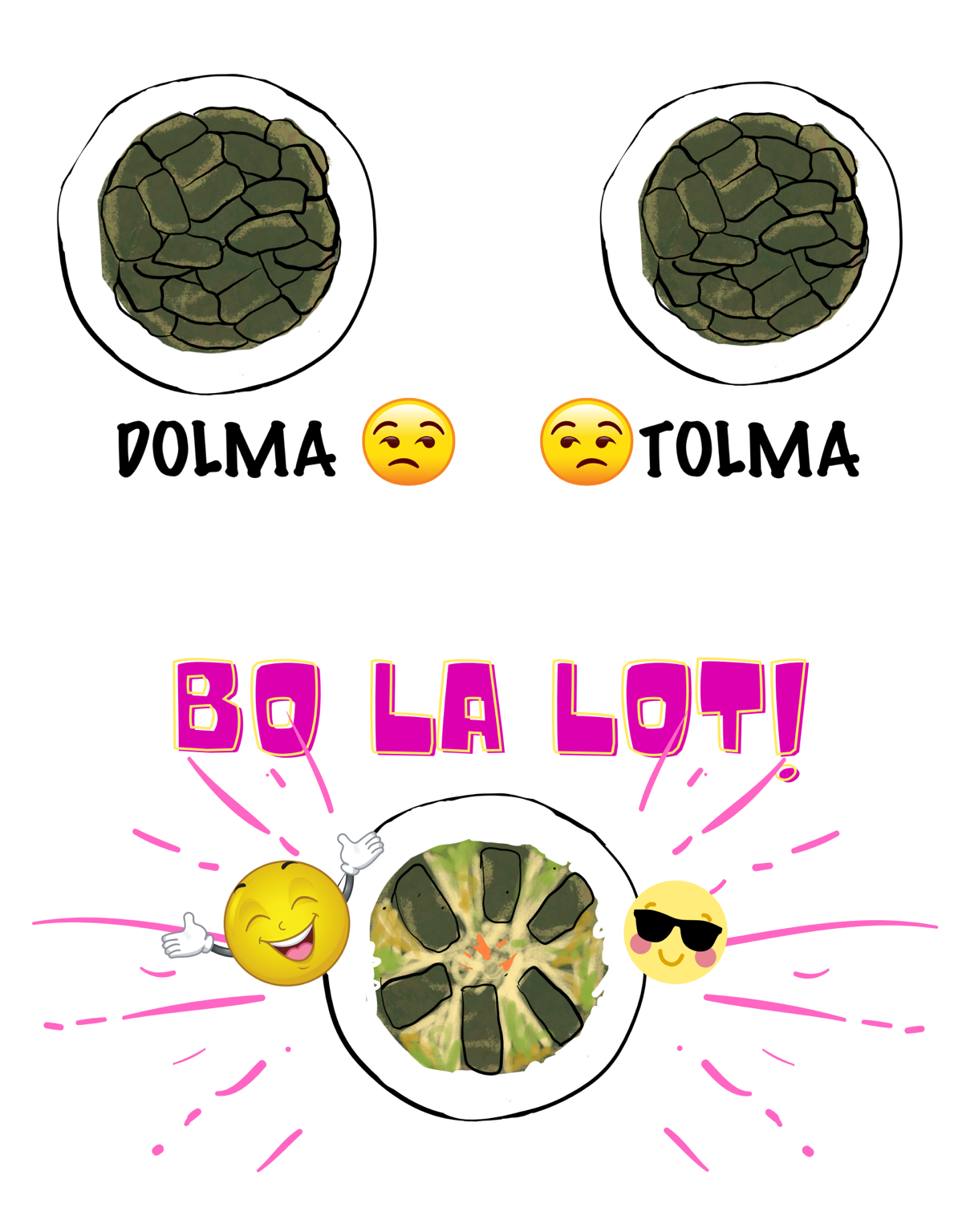 “I think the most delicious dolma is Vietnamese. It is called Bulalot. I advise everyone," Fidan Akhundova. Illustration (c)

Certain posts in the group encouraged Fidan to create an illustration of people from both sides. As she struggled in depicting Armenians and Azerbaijanis, Fidan made use of a commonality between both sides: pain and tiredness. 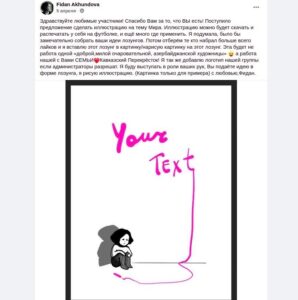 “Pain is a universal feeling, We all feel pain because of the situation. It’s familiar to everyone, to each nationality. And I tried as much as possible without adhering to any of the sides to show people who are tired, do not trust each other.”

The group’s friendly atmosphere didn’t arise spontaneously, it required work. “Kavkazskiy Perekrestok” is managed by 8 moderators with a long list of strict rules. However, the group has already been shut down once by Facebook for the flow of uncontrolled comments and has also been criticized by some media, including Sputnik Armenia, which accused Armenian members of the group of being “naive” towards Azerbaijanis. 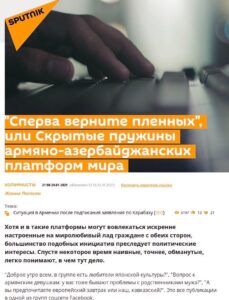 The article on Sputnik Armenia, titled “First return the prisoners” or “Hidden springs of the Armenian-Azerbaijani peace platforms”

Lala, one of the moderators of the group, says that arguments still occur in the comment sections, but they are immediately addressed and resolved by the moderators.

“Each situation is considered by the moderators of both sides, so that it is more objective now. We often add new rules. We have noticed that this creates an atmosphere of trust. Trolls and bots are no longer interested in sitting in a group”, says Lala.

The group is another attempt to build dialogue between Armenians and Azerbaijanis, but this time in a virtual space.

When journalist and conflict reporter Shahin Rzayev, 55, first joined the group, he says his attitude was a bit skeptical. Over the last 30 years he participated in many peace building programs and his expectations for such initiatives are low. But he later realized that the group has a different potential. Shahin Rzayev is hopeful about this initiative.

“Old projects could not bring a fresh breath. They are like the old nomenclature, there is a group of these very peacekeepers who travel to different countries, fulfill the agenda, and then sit in a banquet and speak posts. This is a completely new format, as it were, which helped to reboot this process”, highlights Rzayev.

In the “Kavkazskiy Perekrestok” group, discussions about the way of life of Armenians living in Baku before the 90’s and comments from Bakuvians living there currently also crossed paths. Discussions revolving around the visual changes of the city and old common memories are one of the topics discussed in the group.

Sharing information about old Baku sometimes results in  deep conversations with Armenian members, who remember and lived in Baku yet have no chance to see the difference.

When Shahin posted an old photo of Baku, capturing the Moscow Avenue of the 70’s lined with many trees, one of the Armenian members of the group mentioned that he used to live there. Shahin states, “He asked about the cinema there. I replied that the cinema there does not exist anymore.” 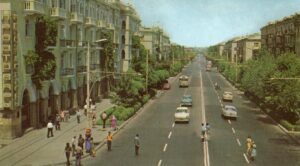 Moscow avenue, Baku, 70’s. Photo was uploaded in the comments to the post about modern Baku, by Shahin Rzayev

One of the moderators of the group, Roza Hovhannisyan, 34, who is enthusiastic to contribute to peaceful relationships between two societies, says that “Knowing each other, interacting, and discussing the issues and problems together can be a good start for everyone.”In the beginning Roza had concerns that society wouldn’t accept the group, due to these concerns they decided to make the group private. But everything wasn’t that categoric. She and her colleagues from the other side cooperate together every day, which also helps them get to know each other better.

“Conducting the group is an ongoing process and we (moderators) always keep our fingers on the pulse not to have quarrels or offensive arguments. Till now we have succeeded in it.”

For Shahin, not politicians but other citizens of the societies should take part in the process “as it concerns their own personal lives as well.”

“That is the key reason for opening the ‘“Kavkazskiy Perekrestok” group on Facebook,” states Roza.

Different people have different understandings. “Kavkazskiy Perekrestok” combined various topics, from food to music to politics  with one goal: “to talk”.

“People have different approaches for the group and that is normal. Some people join, read the posts and become angry and they immediately leave it, some people become angry but still remain in the group and have discussions, and in the end somehow change their attitude. We are not insisting on anything, we just created the opportunity”, says Roza Hovhannisyan .

Another group member, Ani Hakobyan, who is interested in the Armenia-Azerbaijan Conflict but never had the chance to discuss it with the Azerbaijani side says that, “The group gives me a lot, besides the discussions. Due to it I differentiate real and fake news, propaganda. It helps me to stay quiet and react properly.”

Day after day, the group’s members increase, proving that both societies need to have a space for peaceful dialogue.

“I understood that people should keep away from political discussions about conflict as because of those discussions they start to ‘fight’. And sometimes it is the manipulation that we can’t run away from”, adds Hakobyan.

“The war shook up many people. So this group is a very positive reaction to the war”,  concludes Rzayev.