Around the War Memorial in Tbilisi

Protester: “We only have one day in a year and even on this day we are hindered.”

Shortly after, a policeman shouted at the demonstrator:

Protestor: “We have been silent for 30 years!”

The memorial is dedicated to the national heroes of the last century of Georgian history – the cadets who died in 1921, commanders of the 1924 uprising, soldiers who died in Abkhazia in 1992-93 and as a result of Russian aggression in August 2008 – has heard many similar conversations in the past years.

The memorial was once called “Chelyuskins,” honoring the story of Soviet pilots who carried out a rescue operation for dozens of people stuck in the Arctic. After the collapse of the Soviet Union, it became a square to honor the heroes who died for the unity of Georgia.

September 27* is one of the rare days when the memorial becomes the center of attention. On this day officials, soldiers, veterans, members of displaced communities, and ordinary people gather here to pay respect to the souls of the soldiers who died in the 1992-1993 war in Abkhazia.

In parallel to the ceremony, members of the displaced community were holding a demonstration at the same location. The protest consisted of several dozen people, who were mostly elderly ladies. Divided by the chain of police, the posters of the protestors were screaming through, asking the government for more attention and support:

WE ARE IDPs, OUR LIVES MATTER TOO!

IDPs should be satisfied with housing no later than 2025!

Simplify the process of obtaining citizenship and status of IDPs for emigrate IDPs!

Allowance for displaced people should be equal to the living wage and all the restrictions that come with it should be removed! 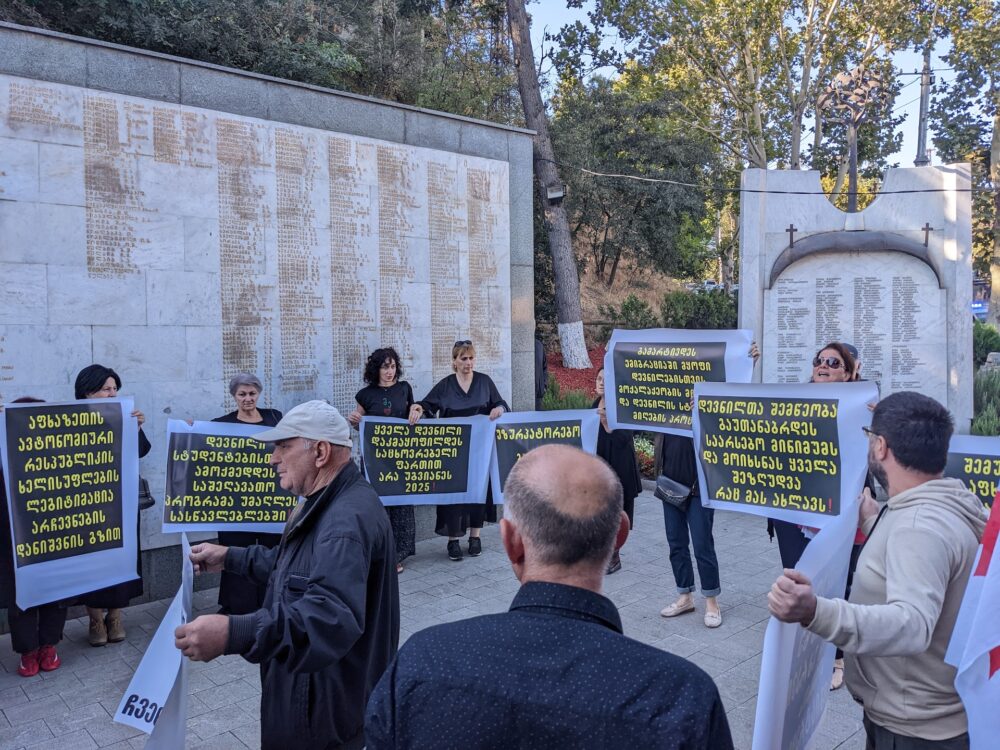 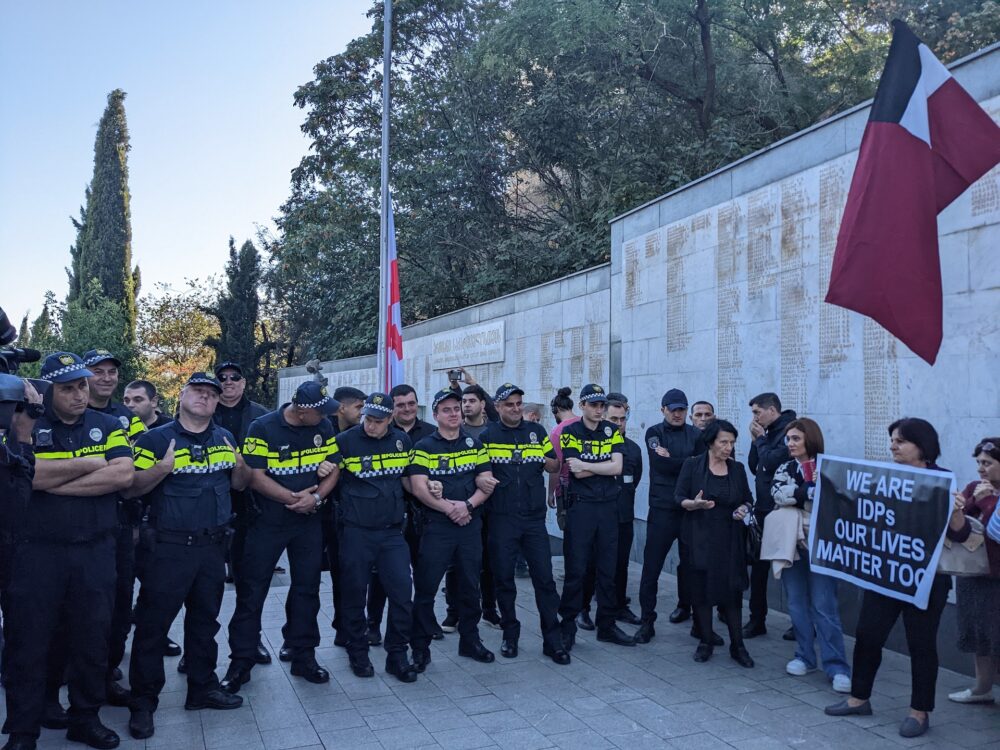 The police moved the rally before the politicians appeared. The officials came, laid flowers at the memorial, and gave interviews to journalists. At first, the police forbade the demonstrators and people who were observing the rally to  leave the space, however, they later seemed to understand the situation and allowed people to move freely.

The use of force by the police was followed by various shouts from the demonstrators, some of whom spoke directly to the police standing in front of them. Police first listened without emotion, silently.

On the other hand, these people cannot return to Abkhazia either. That is why they seem to be stuck in between these two societies. 30 years after the conflict, most live in uninhabitable buildings, and receive only 45 GEL as pension for displaced persons. 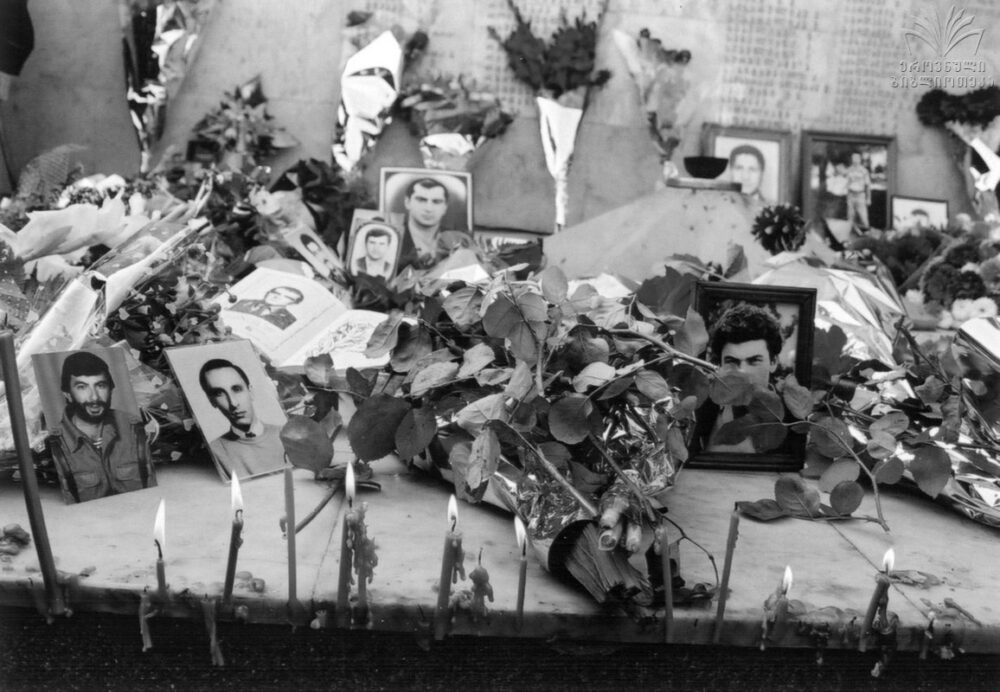 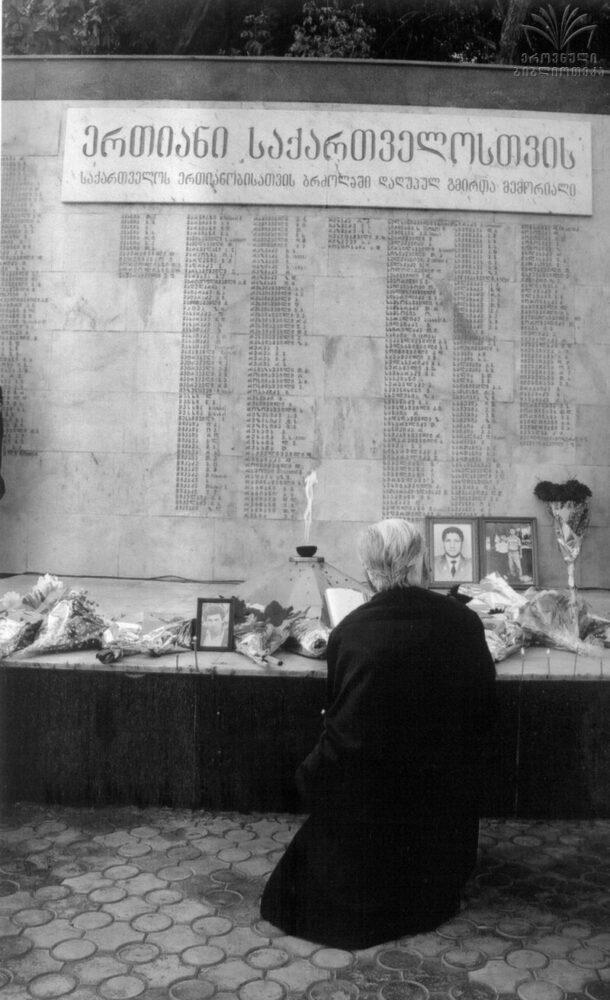 At this year’s ceremony veterans were also present – divided into groups, probably by battalions – and one will notice the same faces every year. It was obvious that only a few small groups attended the commemoration, and the soldiers of supporters of Gamsakhurdia were nowhere to be seen. This time veterans were passive attendees of the event.

The police completely silenced the protest of displaced people, just as they silenced the veterans’ protest held in front of the same memorial in 2011. The demands of the soldiers were related to the improvement of social welfare, and they started a hunger strike with the same slogan. The state first tried to publicly blackmail them, calling them criminals in the media and then dispersing them by force.

Like the displaced community, veterans are remembered only twice a year: on March 14, when they successfully repelled the attack on Sukhum/i in 1993, and on July 2, the anniversary of the start of the Battle of Tamish, during which Abkhazian and Russian soldiers made a joint landing in the Ochamchire region; the Georgian army neutralized them, with huge casualties.

In other cases, no one remembers their existence, and certainly no one remembers that in Abkhazia Zviad Gamsakhurdias Supporters were fighting too. Nevertheless, they have completely disappeared from society; you would not even see them when you go to the memorial on September 27.

Veterans of the Abkhazian war, like displaced people, are a group forgotten by the state. The fight for the territorial integrity of the country and the sacrifice of health and life were valued at 100 GEL per month (it was 22 GEL before 2022). 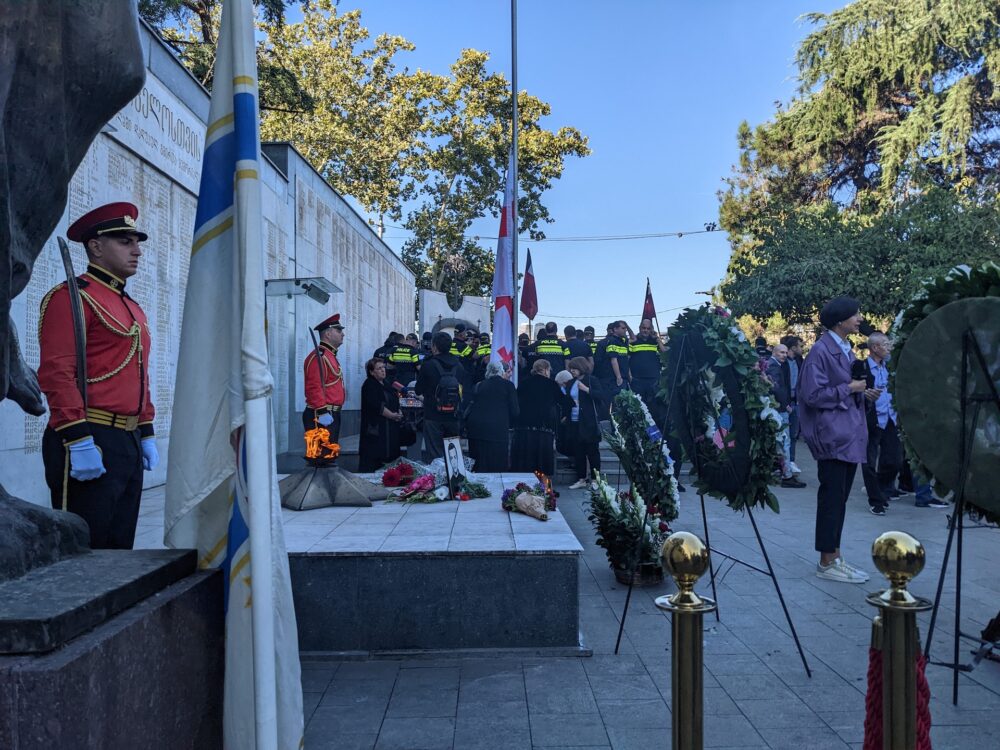 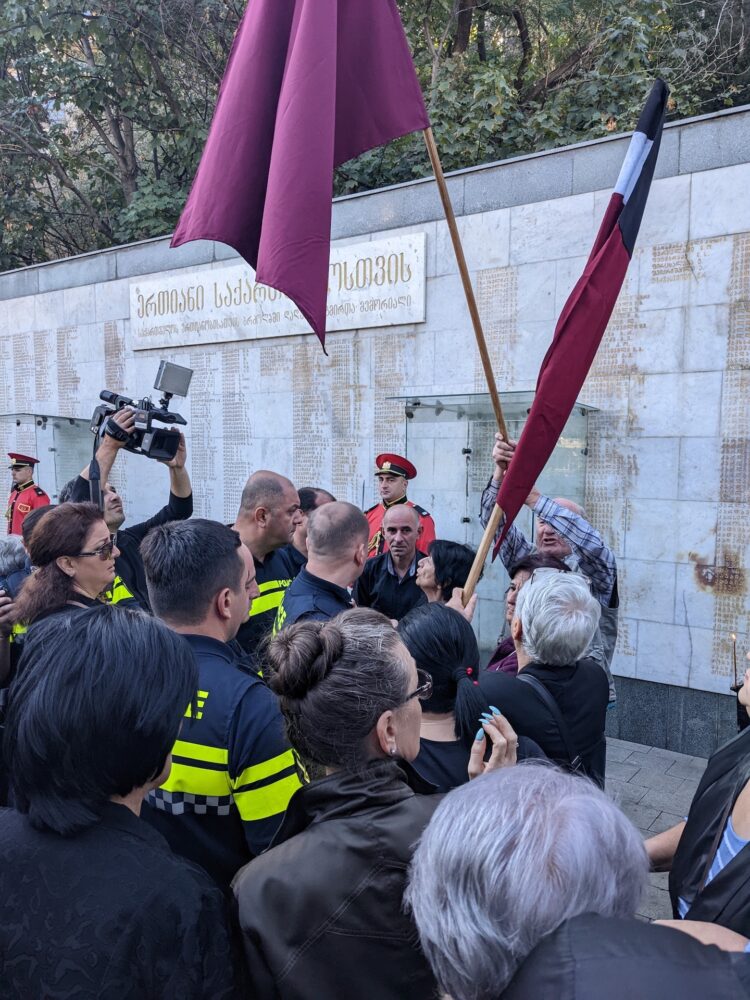 The exiled leaders of the Autonomous Republic of Abkhazia were also present at this year’s ceremony. Ironically, after the end of the armed conflict, Abkhazia has two governments: the first is Abkhazian, in Sukhum/i, which is elected by Abkhazian citizens living on the territory of Abkhazia, and the second  Georgian, in Tbilisi, which is elected by the community of displaced people. In turn, one does not recognize the other.

The representatives of Abkhazia’s Supreme Council came to the monument as well. And although their direct duty is considered to be talking with their own citizens and advocating their interests in the central government, they seemed uninterested in both the protest of the displaced community, and the presence of veterans.

The only group interested in the protest was the police.

The commemoration of the war continues to be a ritual, in which the dead are paid respect, while the living continue to demand attention and social help.

* On September 27, 1993 – after the year of armed confrontations of the Georgian-Abkhazian conflict, Abkhazians established full control over the capital of the Autonomous Republic of Abkhazia, Sukhum/i and a few days later over the entire territory of the republic. For Georgian society, this date is not only one of the episodes of the conflict, but it is considered as the one of the most tragic dates of its recent history.